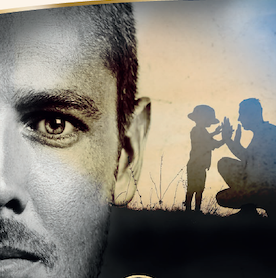 An Integral Development of the Human Being

About Inner Children and Adult Humanness

Since the 1990s, the concept of the so-called "inner child" has been an important tool in psychotherapeutic work. Since then, a multitude of specialized books have been published, all of which deal with the healing of this "inner child", because this "inner child" obviously harbors fears, grievances, injuries up to severe traumatizations in many people, which demand healing, and on the other hand, the "inner child" seems to be difficult to access for the rational and at the same time externalized human being, because it is by its nature pre-rational and accordingly rationally graspable only to a limited extent. Moreover, it seems to reside preferably in an inner place deep down within us called the subconscious and not on the conscious surface. Decades of inner work with many students of the inner school have shown that this so-called "inner child" is related to the observed fact that the vast majority of people mature physically but do not grow inwardly beyond an emotional childishness.

Over the years, work with people's "inner child" underwent a transformation, a shift in emphasis: Whereas at first the focus was almost exclusively on the healing of trauma, as well as on the recognition of childish-tyrannical emotionality that guided people's actions, the inner maturation potential into adult humanness increasingly became the focus of Inner Work. Embedded in the evolutionary-philosophical concept of integral becoming human, the Inner Work posed the simple, central question:

How can a student of the inner path mature into a truly adult human being?

The great spiritual teachings of humanity - and I am speaking of the inner teachings, not of exoteric religions based on faith - state two great goals of the path: 1. Attaining unity consciousness (let's call it that here for simplicity's sake) 2. Attaining the state of truly adult humanness.

Without question, this concept of the injured "inner child" points to a serious, consciousness-constricting process in the mental world, which is also of considerable importance in spiritual teaching that serves the inner liberation and transformation of human consciousness; above all because it does not concern single individuals, but rather permeates whole collectives. It is the great exception to be able to meet a person who lives beyond this mental process; no matter in which social class, or in which culture. This process is called regression in psychology as well as in the philosophy of evolution. Regression is the opposite of progression, which means progress, advancement. While in the externalized areas of life, the "outer world", the mantra of progress is repeated, even invoked, like a prayer mill (e.g. in science, politics and economy), the exact opposite, namely regression,  takes place to a considerable extent hidden inside the people, in the "inner world". This fact, that even educated people do not only develop further, but also regress at the same time, has to be faced. This inner inconsistency however will probably only be of serious interest for people who recognize in consciously attaining the state of "adult humanness" a value for inner harmony and peace of the soul and accept the inconveniences of a serious inner path for it. For it is these people who invest intelligence in a spirit of inquiry that can actually find reality-changing answers to questions that arise: Who is this "inner child" and why do I keep moving back there.

Of course, it cannot be the task of this short article to present the answers of the wisdom teachings, especially of the philosophy of evolution comprehensively and contextually. But there are also simple answers which immediately make sense to every self-explorer:

In the blessing of children, for example, the Gospel of Matthew says: "Jesus said, 'Leave the children and do not forbid them to come to me, for to such belongs the kingdom of heaven.'"(19;14) The right interpretation of this Jesus word reminds us of the innocence of children and the need for the inner human being seeking peace of the soul to regain contact with this innocence of heart. And indeed, I assign the virtue of innocence to the archetype of the boy. (Archetype of the girl: joy) If many people had not mentally buried the access to this innocence, mankind would be spared a lot of inner and outer violence, a considerable part of warlike actions against people, against nature (which - apparently a manifestation of the adult world - all emanate from the so-called "inner child" in humans) would be superfluous.

The lost innocence of (pseudo-)adult human beings therefore can be understood in this context as a consequence of the fact that during their development, during their progression, the inner thread connecting the childlike-innocent state with the perspective of adult humanness broke. In other words, no integrated development took place. This omission, due to the unconsciousness of an ignorant path of development of the outer human being, can be made up for on the inner path by a conscious step back, the conscious regression. This process of conscious regression describes a salutary happening for the soul of the western human being, a happening of inner reconnection, which goes far beyond the integration of childlike innocence. (Re-connection is also a direct translation of re-ligion) Let us note: In the inner teachings there exist an instruction and a guidance to conscious regression, which, among other things, unites inner child and inner adult with each other and thus allows an integral human being to emerge. This integral human being has at his or her disposal, in the present perspective, both childlike virtue (for example, innocence, playfulness, carefreeness) and adult maturity and seriousness, and it seems to be precisely this integration that allows a human being to become truly adult and at the same time serves the peace of the soul. Paradoxically, then, I describe a truly adult human being as one in whom child and adult are consciously united in the present. But is this child, which is spoken of in this inner union in the NOW, the same child as that "inner child", which was previously described as a hidden place of injury, lack and trauma? Regression is the paraphrase of an unconscious, i.e. involuntary inner visit to the past, a backward time travel. Since it seems that this time travel happens latently and constantly, it represents a large part of the normal state of average people. This happening, which can also be understood as an unconscious attempt to retain time (i.e. transience), fixes the past in consciousness, so that people do not know anything about the present moment (which is constantly superimposed). So the fixation of the so-called inner child is actually nothing more than a trace of memory, it is held, frozen time, which has nothing to do with the presentness of the moment, with adult, human presence. The integral teaching teaches the human being’s path of integral unfolding by becoming present in the present moment. A path that leads through the universal stages of consciousness without ever fixing any of them, because on this integral path each stage of consciousness transforms into the next higher one. All by itself. Something like a limited, "inner child" does not arise in this process, because the past is constantly transforming into the new. So nothing remains but the freshness of the present moment.